The percentage of renewables in the electricity supply is steadily growing worldwide. Using a combination of different renewable sources, an ecological and economical electricity mix can be realized across national borders. Decisive here is the reliable supply, storage and distribution of renewable electricity. In the Supergrid project, several Fraunhofer institutes joined together to research just how such an electricity and transmission grid between North Africa and Europe could function. They developed scenarios for a renewable energy system in the MENA region and compared potential technologies. Detailed solutions were proposed and regulatory mechanisms were evaluated. The results of the Supergrid study are now available in a final report.

The Supergrid study was a joint effort carried out by five Fraunhofer institutes each with different expertise. Using a model-based analysis, an interdisciplinary research team first confirmed that renewable energy technologies have a large techno-economical potential in North Africa. Because of this, scenarios were developed that consider an ambitious expansion of renewable energy in the MENA region – with and without the perspective of energy exports to Europe. Because present political conditions hinder the expansion of renewable energy in this region, the scientists also prepared recommendations for new regulatory mechanisms and support schemes for renewable energy.

Before modeling began, the status quo in North Africa and Southern Europe was taken: Existing electricity systems in Europe and North Africa were documented and the solar and wind potentials were analyzed using a geographical information system. Next, the best cost combination of power plants was determined with consideration to site planning and power plant deployment. Finally, the existing transmission grid infrastructure was modeled and the extent of renewable electricity integration was investigated. On this basis, four scenarios were developed which track renewable energy expansion up to 2050. For each scenario different assumptions were made for the electricity demand on site, the electricity export to Europe as well as for the politically motivated targets set for carbon dioxide emission reductions and energy efficiency improvements. “The results of the study show that decarbonizing the electricity supply in Europe and North Africa is feasible in a cost-effective manner,” says Prof. Dr. Werner Platzer, project leader and division director at Fraunhofer ISE. “In each of the scenarios modelled, very high shares close to 100 percent renewable energy were achieved by 2050.”

According to the Fraunhofer researchers, concentrated solar thermal power plants (CSP) will play a major role in a renewable-based supply system in the MENA region. This dispatchable technology serves to complement the fluctuating generation from wind and photovoltaics. In this respect, the development of high temperature storage for CSP power plants becomes very attractive. In developmental research, reducing costs by using less expensive storage materials, e. g. molten salt, and increasing system efficiency is just as important as improving the storage component design and optimizing the complete system. In order to evaluate the performance of different CSP power plant concepts, a simulation platform was created which allows many modeling variations for the concentrator and receiver technology, heat transfer medium and the storage type. At the same time, scientists analyzed different storage materials and components in the laboratory. Actual prototypes of solar thermal storage systems were built and tested. For example, an innovative latent heat storage system with a screw heat exchanger was investigated for applications in direct steam power plants that use water as heat transfer fluid. Other concepts aimed at using salts both as storage as well as a heat transfer medium.

In each of the four scenarios, a large growth of renewable energy goes hand in hand with an expanding direct current grid. One solution is to create a meshed overlay grid with high-voltage direct current lines (HVDC) that enable fluctuating power from renewable power plants to be transmitted over long distances. Such a grid can contribute significantly to the grid stability. Since no such grid exists to date, the Fraunhofer researchers set about modeling it, analyzing the performance with respect to the complete grid management. Power electronics will be a key technology in the expansion of the DC transmission grid. Therefore, the researchers in the Supergrid project developed detailed solutions so that the electronic components of the future can meet the new requirements in the medium-voltage range. Among other developments, the engineers built a medium-voltage DC/DC converter in order to demonstrate the potential of low loss high voltage transistors made of silicon carbide (SiC). In the field of passive components, prototypes of capacitors based on thin glass foils were tested.

About the Supergrid Project
The Supergrid project was supported by the Fraunhofer Gesellschaft. The coordination was carried out by Fraunhofer ISE. Other project partners were Fraunhofer Institutes for Optronics, System Technologies and Image Exploitation IOSB, for Mechanics of Materials IWM, for Integrated Systems and Device Technology IISB and for Systems and Innovation Research ISI.

Further information about the sub-projects: 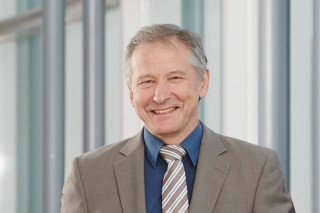